The Road Goes Ever On, Part 1 – Travelling in Against the Darkmaster

Journeys play a pivotal role in most fantasy sagas. The heroes are often travelling through the land; crossing dark forests;  climbing snow-capped mountains; or trying to reach legendary locations.
In Against the Darkmaster we wanted to make journeys one the highlights of your adventures, rather than something that just happens in the background. We tried to design a procedure to help the GM and the group easily create exciting travelling adventures, without bogging down gameplay or limiting the players’ choices.

Whenever the characters are undertaking a dangerous journey, use the procedure described below to determine their path and handle the hazards they’ll face. Keep in mind that these rules are meant to create epic, perilous journeys. Do not use them each time the characters are travelling, but only when you want the journey to be the main focus of their adventure.

For other situations, the GM should simply summarize the characters’ trek in a few sentences, without lingering too much on the details.

Before the actual journey can start, the players will have to set a destination for their characters, and choose the path they’ll follow to reach it. 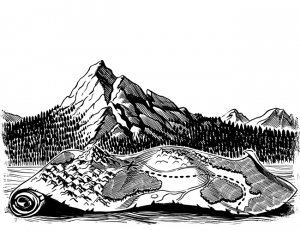 If a general map of the area the heroes are about to cross is present, the GM can show it to the players, quickly pointing out its main features and routes leading to their destination.

If you don’t have a map, the GM can simply describe the lay of the land the characters will travel through, with its dangers and points of interest; presenting the players at least two different paths their heroes could follow to their destination.

During this phase, the players can ask a few questions to the GM, to better prepare themselves for the journey ahead. The GM must answer fairly, but could demand a skill roll if the piece of information asked isn’t common knowledge. Don’t get bogged down too much in this planning phase, though. The characters should be heroes, not tour operators!

Example: the PCs are travelling to the Dragon Mountain, to free their ancestral home from the ancient evil that claimed it. Since they have no map, the GM briefly describes the land before them: “The journey to the Dragon Mountain isn’t exactly going to be a stroll in the park. You’ll have to cross a large stretch of untamed wilderness, far from any sign of civilization. The quickest route to the Mountains is probably through the Darkwood, which lies exactly between you and your destination. The way through the Darkwood, however, is dangerous and difficult. It’s easy to lose one’s way inside the wood, and food and water are hard to find in there. Or you could travel north, going around the wood and through the Blasted Heath. That way is probably safer, but it’s going to take more time”.

“Isn’t there another way to avoid the Darkwood?” a player asks “I don’t really like the idea of crossing this Blasted Heath.”

“You could travel around the southern edges of the wood,” answer the GM “but then you’ll have to travel back north for quite a long way to reach the Dragon Mountain. It’s going to take at least twice the time it takes to cross the Blasted Heath”.

Once the path is set, the GM establish the time required to travel to the chosen location, as explained in the Travels section of the Quickstart Rules.

Example (continued): the players have decided to cross the Darkwood, which is a forested region and thus count as Rough Terrain. They’re bringing (Heavily Encumbered) ponies loaded with water, rations and equipment for the journey, so their travelling speed is 15 kilometers per day of travel. The Darkwood is about 300 km wide, which means it will take more or less 3 weeks (20 days) for them to cross it.

After calculating the length of their trip, the GM must determine the Hazards the heroes will face during their travel.

Hazards represent challenges, obstacles or encounters the characters will have to overcome (or avoid) to reach their destination.

The number and nature of the Hazards encountered depends on the length of the journey and on the notable locations and regions the characters will travel through.

Heroes will encounter one hazard per week of travel (or portion thereof), plus one for each notable location or obstacle (mountain range, marshy area, large river,…) in their way. 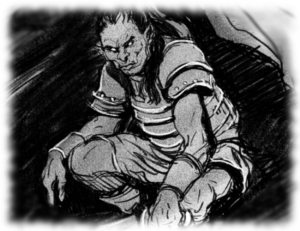 This means that usually characters will face 2-3 Hazards during a medium-length journey. If you come up with more than 6 Hazards, consider breaking the journey down into multiple shorter steps, as it will probably take more than one gaming session to resolve.

Hazards are divided into six broad categories (we will talk more about them in the next part of this post series), according to the type of obstacle they represent. The GM should try to pick each Hazard from a different category, to give the characters a greater variety of challenges to overcome.

Once the GM has chosen the Hazards, he must announce those that are evident or otherwise known to the characters (for example, a difficult mountain pass they have to cross), keeping the rest secret until they’re revealed.

Example (continued): the trek through the Darkwood takes three weeks, so the characters will have to face at least three Hazards. Additionally, the Darkwood is home to the palace of the High King of the Dusk Elves, which is definitely a notable location and thus brings the total of the Hazards encountered to four.

Looking at the Hazard categories, the GM chooses Natural Obstacle, Free People, Perils from the Ancient World and Wild Beasts. He then announces to the players the first two, since their characters are very likely to be aware of them: “as I’ve said, navigating through the Darkwood isn’t going to be easy. You’ll have to be very careful to avoid losing your way (Natural Obstacle). Also, keep in mind that within the wood is the reign of the Dusk Elves. They aren’t necessarily hostile, but they’re wary of strangers and may question or even detain you, should they catch you crossing their domains without permission (Free People)”.

He keeps the Wild Beasts (Great Spiders, that have recently made their nest in the deepest recesses of the wood) and the Perils from the Ancient World (ghost lights and will-o’-the-wisps, that mark the sites of an ancient battle and could led the travellers astray) for himself. The characters couldn’t possibly know about them, so they will be revealed when the heroes will meet them.

At this point, the characters are committed and the journey may begin.

In the next part of this post series we will discuss about the various hazard categories, we will see how they come into play and how they are resolved and contribute to create an epic journey for your heroes.

As usual, if you have comments or questions, don’t hesitate to write here or on our G+ community!