The Road Goes Ever On, Part 2 – Hazards

Welcome travellers, to the second part of our series of articles dedicated to th epic journeys your heroes will face in Against the Darkmaster!

In the first part we saw how to choose your path, and how to prepare before embarking on an expedition. We also briefly introduced the Hazards and the challenges your characters may encounter on the way to their destination.

These Hazards are the meat of each travelling adventure. In this article we will describe the various hazard categories, and we will see how they come into play and are resolved.

Each Hazard is resolved as a separate scene. The GM zooms in, describes the obstacle and the PCs face it as they deem appropriate.

Note that the GM should never suggest (or force) a single solution to a Hazard, but should rather present the situation fairly and leave the characters decide their course of action.

If they’re successful, the characters will forge ahead, carrying on with their journey and proceeding to the next Hazard, until they’ve reached their destination.

A Failure or Partial Success, on the other hand, means a setback, and generally more trouble for the characters.

The GM should come up with appropriate consequences, based on the Hazard itself, on the degree of failure, and on the PCs’ decisions and actions.

On a Partial Success, the GM can impose a Condition, a Minor Injury (see Damage, Wounds, Health & Healing chapter), or a loss of time or resources on the party. For example, the characters could become Weary after a long, exhausting march; or could be forced to take a detour (lengthening their trip by a few days and thus consuming more rations) to avoid enemies patrols; or one of them could fall and sprain his ankle (suffering a Minor Injury and taking a -20 penalty to his rolls) while trying to cross a treacherous ford.

On a Failure, the GM can present a brand-new Hazard, which is added to those already prepared, and that the characters must face immediately. For example, the heroes could be ambushed or cornered by the enemies they were trying to avoid. Or they could find their way shut, and forced to take a different, darker and more dangerous path to reach their destination.

This means that each Hazard could potentially become an adventure on itself, as the heroes could decide or be forced to deviate from their original itinerary; stop to resolve a particular problem; or take their time to investigate something on their way. 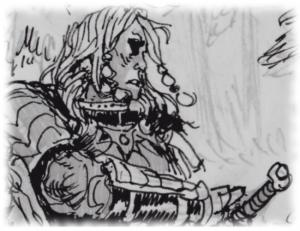 Example (continued): our heroes are finally crossing the Darkwood, hacking their way through the forest. The GM brings the first Hazard into play and ask the party for a Wandering roll to navigate the treacherous path across the wood. Maedoc, the PC who’s acting as their guide, unfortunately rolls a Failure. The GM nods and narrates: “you don’t know when, but at some point you must have taken a wrong turn, because the path you were following abruptly stops at the foots of a sheer rock cliff. You’re at a dead end. Suddenly, a blood-curdling howl raises from the woods surrounding you. Moments later, a second howl seems to answer the first one, this time much closer to you. The ponies start stomping their hooves and roll their eyes, menacing to bolt away at any moment, carrying your provisions with them. What do you do?

Below you’ll find a few examples of possible hazards the heroes may have to face, divided into six different categories.

We obviously couldn’t list all the possible problems characters could encounter during their travels, but we tried to give the GMs some ideas on how to generate their own Hazards.

For each category, a brief discussion of which Skills may be used to face that kind of Hazard, along with a list of possible complications in case of failure, is given.

Keep in mind that the solutions and Skills listed are in no way intended to be prescriptive, but rather to give some examples of how each category of Hazard could be solved.

In other words, the GM should always consider the characters’ actions, before deciding which Skill to use.

Example (continued): Maedoc and his companions are besieged by wolves in the middle of the Darkwood, and are beginning to regret the moment they set foot in this accursed forest.
Deirdre’s player is the first to react, telling the GM: “I’ll use my magic to speak with the ponies! I want to reassure them, tell them that we’ll protect them and that there’s nothing to worry about!”

Maedoc then has an idea and says: “I want to scare these stupid wolves away. Astarise, help me cut down some wood, we’ll need a big fire!”

Mornien smiles and replies: “Great idea, Maedoc! I’ll use my Ignite spell to light the fire as quickly as possible!”

“I-I think I’ll keep my sling readied,” says Tobold “in case the fire isn’t enough to scare the wolves off…”

The GM briefly consider the characters’ actions, then says: “Ok, Deirdre and Mornien, cast your spells; Maedoc, make an Athletics roll to see how quickly you can gather the wood. Astariste, you may help him. Tobold, you don’t have to roll anything for now, you’ve readied your sling, so it will be loaded in case the wolves end up attacking you.”

The players grab their dice and start rolling…

Dealing with the weather can require Nature or Wandering rolls, to keep a direction despite the conditions, find a shelter or avoid suffering the consequences of exposure.

Failing to deal successfully with this kind of Hazards can lead to a long detour or forced rest (and thus the expense of additional rations); 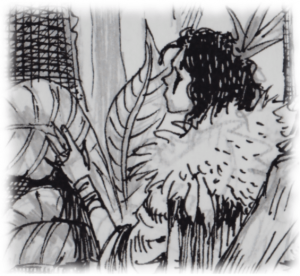 the Weary condition; the party becoming hopelessly lost in the middle of the wilderness or blindly walking into an enemy’s ambush.

Steep mountain cliffs, thick forests, fetid swamps and scalding deserts are some examples of the natural obstacles the heroes may have to overcome during their journeys.

Hacking your way through a forest or jungle may require a Nature roll, while crossing obstacles like a chasm or climbing a treacherous mountain path may call for a Athletics or Acrobatics roll.

Failures coming from facing natural obstacles could lead to injuries; loss of equipment; or being forced to choose a different trail.

Perils from the Ancient World

The world is full of relics and ruins from the ages past, which sometimes hide horrible dangers, ready to spring on the unwary travellers.

Haunted ruins or enchanted streams could lure adventurers who fail to resist their magic to their doom. A Song & Tales or Arcana roll could permit the heroes to recognize the signs of the dangers lurking before them.

Characters failing to overcome these Hazards may find themselves pursued by a legendary foe; trapped by mystical forces; or suffering the effects of a terrible curse.

Heroes may have to deal with wolf packs, poisonous snakes, stampeding herds or swarms of biting insects while scouting the wilderness.

Encounters with wild beasts may often be avoided with Nature or Hunting skill rolls, but sometimes a fight is inevitable.

Typical complications coming from this type of Hazard include injuries, Save Rolls against Poison, and long and tiring chases.

The servants of the Darkmaster prowl the land, bringing chaos and hunting those who dare to defy the will of their cruel lord.

Perception and Hunting will help the heroes to spot ambushes and other traps set by their enemies against them. Stealth or Deceive rolls will allow the characters to avoid confrontation in some cases, but other times they’ll have to fight or flee for their lives.

The fate of characters defeated by these evil creatures is dark indeed. Those who survive are often captured to be dragged before their masters, tortured, or worse… 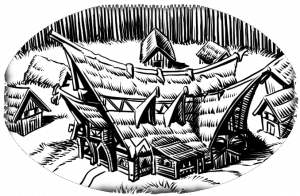 Even among those who do not serve darkness, not everyone is friendly. Old grudges separate Kin from Kin, and fear makes good people suspicious of wandering strangers. Alternatively, the heroes could meet people in need, begging for their help or asking them to perform an urgent task of some sort.

Character may have to resort to Charisma or Deceive rolls to persuade others of their good intentions. In other situations, the heroes may be saved by a Cultures roll, or simply by the payment of a toll of some kind.

Complications coming from this category of Hazards could mean being denied hospitality or even being chased out of a region. In the worse cases the characters may be imprisoned or forced to fight.

After each Hazard, the PCs regroup and decide to push on and proceed to the next step of their journey, or stop to rest and/or resupply.

In the next part of this series, we’ll talk about Camping and Safe Havens, and we’ll see how characters can stop to tend their wounds and recover their strengths during a long journey.