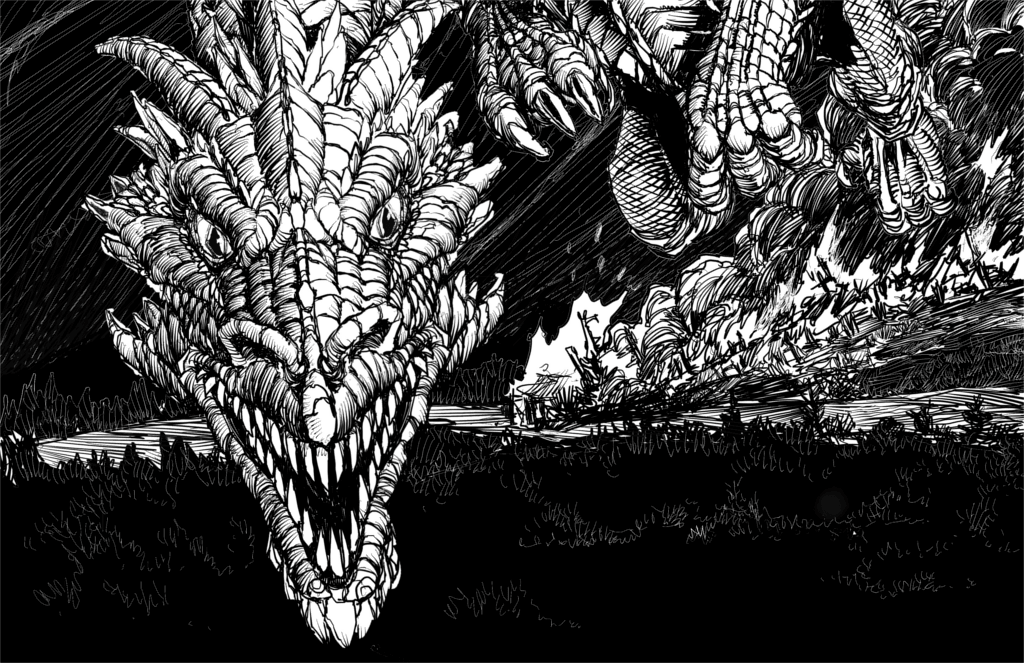 Hello adventurers! Until now we have talked almost exclusively about your heroes, discussing their adventures, their growth, their tales, and their journeys. But with the spooky season approaching, we’ve decided to take a look at the other side of the coin for a while. So, let’s talk about monsters.

The world of Against the Darkmaster is inhabited by a host of strange and wondrous creatures, from the diminutive and impish Redcaps, to the colossal Fire Drakes and the dreaded Maimlords. Some of them are friendly, or at least civilized, but many definitely aren’t.

In game terms, monsters and creatures are treated much like the player characters, with their HPs, Combat Bonus and other characteristics. However, since each of these creatures will often appear only for brief periods of time during the campaign, and since their statistics tend to really matter only during combat or action scenes, their stats usually don’t need to be as detailed as those of the PCs. Instead, their statistics are presented in a “condensed form”, like those you can find in the Quickstart Rules: 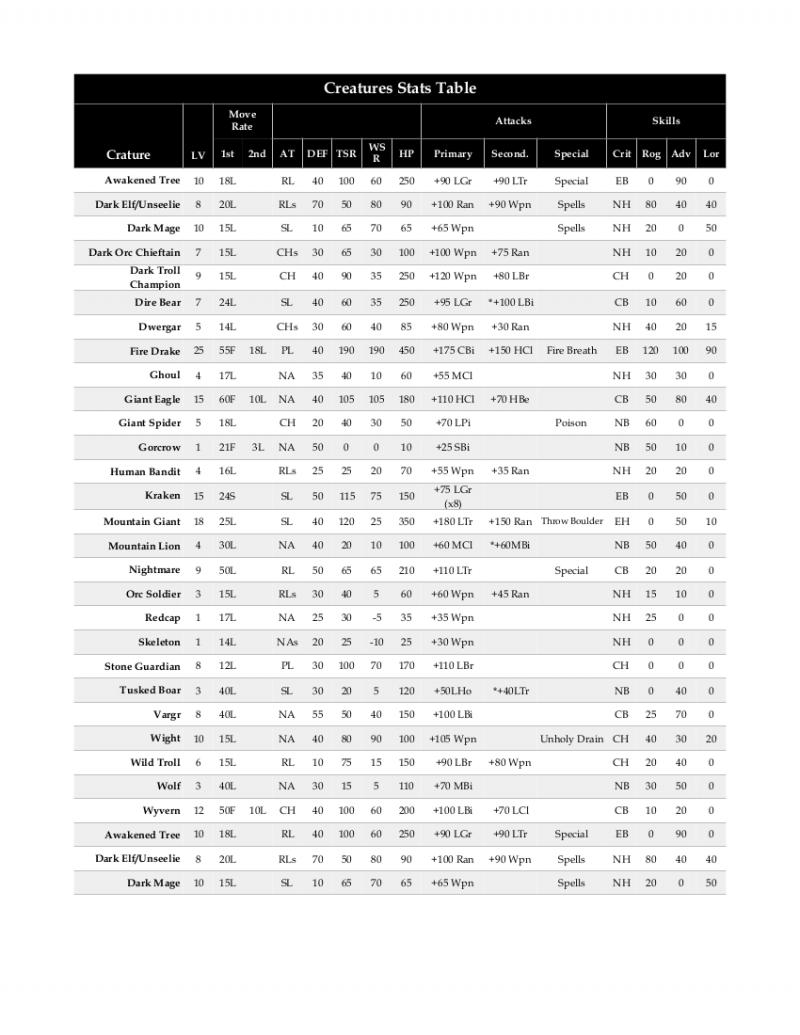 Let’s see what all those numbers and acronyms mean.

Creature: The creature’s name.
LV: The level of the creature, which determines the Attack Level of its Save Rolls and gives an idea about the danger it poses to the adventurers.
Move Rate: The rate of movement (in meters/round) of the creature. The 1st value represents the primary, preferred movement of the creature. The 2nd value indicates the creature additional movement modes (if  any) and their speed. Codes are: L = Land, F = Flight, S = Swim.
AT: The standard Armor Type of the creature (either natural armor or armor typically worn by it): NA = No Armor, SL = Soft Leather, RL = Reinforced Leather, CH = Chain Mail, PL = Plate Armor. The lowercase “s” after the Armor Type acronym indicates that the creature carries a shield (already factored in the creature’s DEF bonus).
DEF: DEF bonus of the creature.
TSR: Toughness Save Roll bonus.
WSR: Willpower Save Roll bonus.
HPs: Hit Points Value or, in other words, how many HPs this type of creature usually has.
Attacks: Describes the type and bonus of the creature’s most commonly used attacks.
Primary is the preferred (and often best) form of attack. Secondary is a backup attack the creature may decide to use in special occasions or when Primary attack is unavailable. If the secondary attack is preceded by a * symbol, then the creature can perform this attack as a Free Action immediately after its primary attack scored a Critical Strike.
Special Attacks may occur anytime at the creatures will or are triggered by other conditions and are detailed in the creature’s description.
The number in the Attacks entry is the CMB of the attack, while the letter code indicates the type of attack. Wpn stands for Weapon (see creature’s description for preferred weapons), Ran stands for Ranged, which is usually a Missile or Thrown weapon. The others are natural or non weapon attacks, with the first letter indicating the size of the attack (and maximum result on the appropriate attack table): S = Small, M = Medium, L = Large, H = Huge, C = Colossal; and the following two-letters code the type of the attack: Be = Beak, Pi = Pincher, Br = Brawl, Cl = Claw, Bi = Bite, Gr = Grapple, Ba = Bash, Tr = Trample, Ho = Horn, St = Stinger, Ty = Tiny animals.
Crit: Type of Critical Strikes the creature takes on himself. First letter of the two-letter code indicates the tier of the creature to determine Critical Strike reduction: N = Normal (no reduction), C = Champion (-1 level to all Critical Strikes taken), E = Epic (-2 levels to all Critical Strikes taken); the second letter the type of creature: H stands for Humanoid creature, B stand for Beast (or beast-like).
Skills: This is given as a reference for the average Skill Bonus the creature has when using any skills from the corresponding skill category: Rog = Roguery, Adv = Adventuring, Lor = Lore. Please note that the GM is free to both modify this values for particularly skilled/unskilled specimen, or either add or subtract a bonus or penalty from the bonus listed to better reflect the creature’s specific skills. For example, wolves will have the standard +50 Perception bonus, but their bonus to other Roguery skills will probably be much lower.

Keep in mind that these stats are meant to be used as a quick reference during the game, or to give an idea of the general capabilities of the “average” specimen of a certain creature. The monster description will give you more information about that creature role, habitat, origins and common tactics and special abilities.
However, the truth is that each monster is a unique individual, and adventurers that assume to know everything there is to know about a creature just because they’ve faced a monster of the same type before (or read its stats in the manual) are often in for nasty surprises… 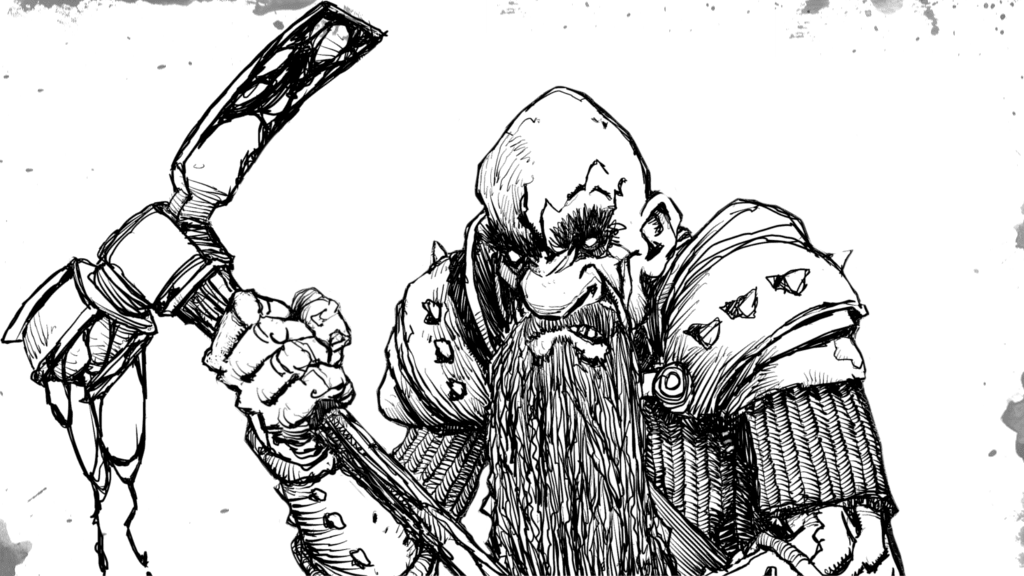 That’s it for now, but stay tuned because we’ve got a very important announcement coming up soon!
Until then, happy monster hunting, and let us know if there’s a particular creature or monster that you’d like to see covered in one of our future posts!