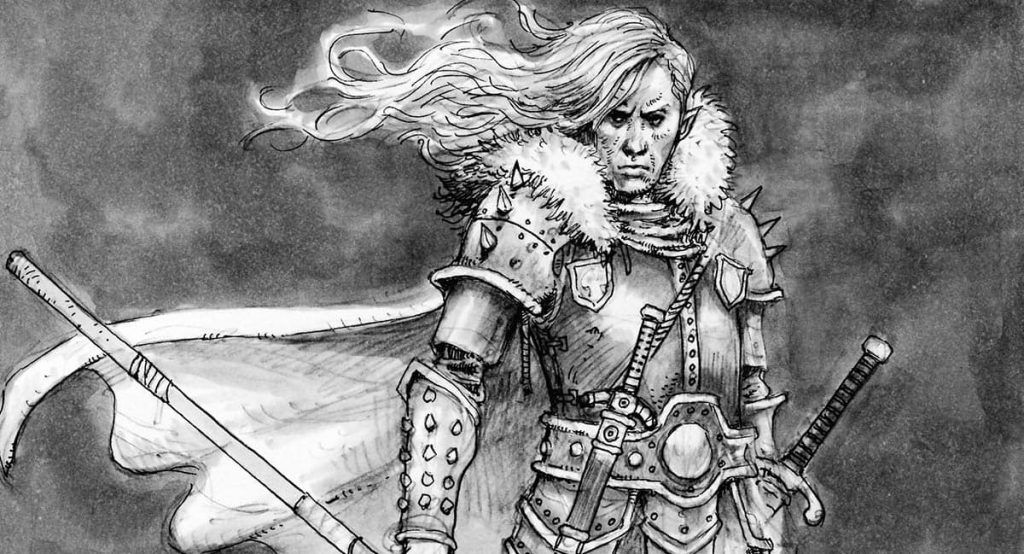 The Strider is dead, long live the Strider!

Let’s put it straight down from the beginning. We killed the Strider.
After our latest playtests, we finally took the decision.

We always were, each to some degree, dubious about the whole concept of a “Strider” (aka “Ranger”) Vocation.
In every RPG we ever played the class seemed to make little to no sense.
What is a “Ranger” supposed to be in the first place? A fighter/warrior type class with an attitude for living in the wilderlands? A lightly armored, dual wielding murderhobo – also prone to be bested by any other fighting class of the game? A mixed class with (a very few) spells (that generally suck)?

So before coming to the reasons beneath our decision about the Strider, let’s make a little retrospective on the genesis of the whole trope of the “Ranger”-type character classes.

AD&D 1e firstly introduced the concept of the Ranger, probably inspired by characters like Aragorn and the eponymous Rangers of Ithilien in the LotR books, as a “prestige class” (or a “sub-class”) of the Fighter. It had crazy pre-requisites and seemed obv broken, with two Hit Dice at first level and spells and the two-weapon fighting skills! However it had a level cap, and higher level advancement requirements, and it was limited by the AC choice – so if you ever played one for more than a few sessions you’d probably agree it was quickly bested by other fighting classes, from the humblest Fighter to the crazily uber-powered Paladin. The few spells and thieving skills were only gained at higher levels and were not much more than utilities. An interesting variation, but probably not worth playing it if not for the trope itself. You could have made a way better “Ranger” (as I did several times) multi-classing or bi-classing a Fighter with a Thief and/or Cleric.

AD&D 2e soon followed, and the Ranger still was a sub-class, but the pre-reqs were gone and it was a little normalized on par with the other classes. Still it sucked hard against more viable options. When the Skills & Powers were out, you could have made a way better “Ranger”-type character by cherrypicking character options and talents. I once made up a custom character with Barbarian Hit Dice and thieving/outdoorsman skills, Fighter THACO, daily spells and backstab! Ok, ok – the Player’s Options books were obviously broken so this doesn’t really count, but you got the idea 🙂

3e D&D introduced the concept of a whole standalone Ranger class. It had a decent hit power with good fighting skills and some utilities spells. To really have an edge, however, the better thing to do was to pick a single Ranger level (for the two weapon fighting option), a single Barbarian level for the Rage, and then max out as a Fighter. So it basically was like throwing in a splash of Ranger in a full Fighter character. Also, the Barbarian had outdoor skills quite on par with the Ranger but with twice the hitting power. Then the Masters of the Wild came out, and the Tempest entered the arena. A prestige class obviously thought off to be easily added on top of the Ranger class, allowing for 12+ attacks per round. This probably marked the starting point of the drift of the Ranger from the “warden of the wilds” to the “two-weapon wielding murderhobo” that afterwards became the common trope for the class. And, just to clarify: where the hell had born the idea that the Ranger was a master at fighting with two weapons in the first place? Did Aragorn ever use two weapons in the whole LotR books? Or the Rangers of Ithilien? Or any Elves or whatever else character in the fantasy fiction?

However, the damage was already done, and 3.5e D&D only worsened it. The Ranger was made a glass cannon (lowering its HPs – but not raising its AC!). Yes, you could have made a decent build with talents and splatbooks and… but hey, you should also have played a way more powerful and frankly interesting characters in another way.

Anyway the trope of the Ranger as “the jumpy dude in leather armor with two scimitars” was born. Computer games empowered the stereotype, stripping it of any remaining tie to its (possible) fictional origin. 4e and 5e D&D were simply other steps down the path already traced.

But let’s step back to take a look at that D100-based game.
The first edition of Rolemaster featured a standalone Ranger class. It was way more true to the spirit of the inspirational characters, but it was also, quite frankly, a wimp. Poor weapon skills, light armor, not so much tough to be cannon fodder and those spell lists… C’mon, guys! Who the heck would have ever wanted to spend tons of DPs and spell points to cast a level five spell that gave… a +5 bonus to Resistance Rolls! Uh, seriously?
RM2 did not improve much on that. The Companions introduced little variants for the Ranger, and the ‘zines and forums were full of “Ranger hacks” trying to give the class a little dignity and playability when confronted by an ironclad Noble Warrior and a spellshaping Arcanist. Fail.
RMSS and RMFR Rangers were possibly even worse of their RM2/RMC counterparts. Suckin’ suckers, really.
You could have made way better “Rangers” than a Ranger by mixing classes and options. Some Training Packages and Talents allowed for kickass bonuses to the outdoors Skills (like “Outdoorsman”). A Rogue or Fighter with Outdoorsman bested every Ranger without breaking a sweat. Did you want a spell-casting Ranger? Then you could have done a way better one by building a semi-spell user specialty Priest of Nature, Animals, or Life with the Channeling Companion.

And what about MERP? It was the right game, the chance to finally give the stereotypical character a refurbish, to make it at the same time more playable and more true to the original inspirations. And again? Fail. Let’s look at it. +2 Prof Bonus per level to Weapon Skills up to +40. Good but not that good. Decent DPs but not so much to develop more than a primary weapon and a secondary one at a lesser bonus. Terrible, terrible spell choice. But why the spell casting capabilities, to begin with? What was the rationale for that choice, from AD&D to RM (that was technically a “hack” of the former) down to MERP? No one possibly knows. It was some crystallized choice that was passed down from game to game, acritically. Like “Hey, all other Rangers in all other games (especially that one from the company from Lake Geneva) cast spells so our Ranger too will cast spells!”

We thought a lot about each of the above when conceiving the core rules of Against the Darkmaster.
We were unsure whether to put a “Ranger” class in the game or not from the first brainstorm – opinions were discordant. We immediately agreed however that:

So we laid it down right there, in the middle of the Warrior and Rogue Vocations. We used the former two as benchmarks, like the two poles between the Strider should have found its middle ground. We reworked it lots of times. We changed the Development Points, the Vocational Bonuses, the Vocational Skills (prior to deciding to remove them). It seemed from the first instant that there was not so much room for it. The Warrior was the best at fighting. The Rogue was the best at maneuvering. What was the Strider supposedly the best at doing? Adventuring, yes. But then – how much Adventuring will occur during adventures? Quite a lot during Travels but a lot less in any other situation. And pretty much any other character, slightly geared towards the Adventuring skills field, could have been on par with the Strider. Put some points in the Skills, pick some Background Option, place those Stats in the right way and BAM! You had a non-Strider character perfectly adept at Adventuring but also probably better ad doing something else, very specifical and possibly very unique!

Then we playtested it a lot. The results were unfortunately unforgiving. We had Dwarven Striders, Elven Striders, Mannish Striders, Half-Elven Striders. Even Half-Orcish Striders. They were always somehow uninteresting and less specialized than other characters. Their XP picks were punishing and very hard to obtain. Their skills were generally lower than other characters in pretty much any specialized field. How come we made such a coarse error? After all, we used formulas and calculations to distribute points among the Vocations.
Then we realized that the Strider had two main problems:

So we recently decided to most likely remove the Strider Vocation from the rules in future iterations.

We thought that you really don’t need a Strider Vocation to play a “Strider-type” character.
Think of Aragorn when he roamed the North. Was he something different from a high-level Warrior with good Stats and some decent Adventuring skills, carrying no heavy armors? We guessed no. Later during the story when he comes out as King Elessar, he wears a f**ing plate and rides into battle to grind some orcs!
Were maybe Legolas, or Menion Leah, or Richard the Seeker Striders? Not at all. They were probably Warriors and Wizards and Dabblers and Rogues and Champions and Animists with some Adventuring skills.

So we had the idea: what if “Strider” had simply become a Background pick? It sounded completely reasonable to us. So we made up a “Strider” Background Option available to all characters that the player might want to flavour like the lonely, silent and self-sufficient wanderer of the wilds.

It will be in the Full Rules but why not spoiling it for you, at least its Minor tier? So here it is…

You lived most of your life in the wilderness, and are accustomed to the laws of Nature. You are stigmatised as an “outsider” by most part of the civilized people you meet – but you probably don’t care.

Minor (cost 1 BP): Write your Nature about why did you prefer the harshness of the wilds to the comforts of civilization. You gain a special +10 bonus to all your Adventuring skills while you are outdoors, far from civilization. Furthermore, you can travel up to 1.5x normal overland distance per day while moving alone, either by foot or mounted, as long as you’re Unencumbered or Lightly Encumbered.

What do you people think about it?