Welcome back, weary traveller! You’ve arrived just in time, see that big fellow over there? Athelstane is the name, he just came back from one of his adventures and was telling us all about it. Stay a while and listen! Who knows, you might learn some useful trick…

We were tracking down a small group of orcs. I found their footprint half day north of town, so Gandrell and I started to follow them. Not later than a day and a half after that, we found their camp near the Standing Stones of the Ancient Kings. They must’ve been there for at least a couple of days, which lead us to believe that they were waiting for someone. We quickly agreed to take them down, and find out who or what was keeping them waiting.

We planned to pelt them with Gandrell’s arrows, while I would go around and surprise them, hitting them on their flanks. I quietly grabbed my great axe and started circling them. Unfortunately, a piece of my armor clashed against a protruding rock, betraying my presence.

As the combat is about to start, the orcs are still unaware of the heroes’ presence. Gandrell prepares by nocking an arrow on his bow, while Athelstane attempts to maneuver around the orcs. The GM calls for a Stealth Roll for Athelstane, who rolls a total of 72, which is a Failure. The orcs are alerted to Athelstane presence, so the combat begins.

The two creatures stared in our direction, as of waiting for something to happen, then one of them spoke something incomprehensible to me, and they readied their spears, slowly advancing toward me. I run toward them, my great axe over my head. I heard Gandrell’s arrow tearing the air, and the creature further from me fell on the muddy ground, holding its leg and screaming like a wild boar. The other tried to thrust its spear through my thigh, but I was able to intercept the blow with my axe. This left me enough room to land a weak but precise blow,  forcing it to take a more defensive stance.

Round 1
Assessment Phase: the GM has one of the orcs take a Perception Roll as a Free Action to see if they’re able to spot Gandrell, too. The orc rolls lousy, so for now, the two creatures remain unaware of the elf.
Action Declaration Phase: the GM declares that the orcs are going to attack Athelstane, taking a Move to Engage Action and a Melee Combat Action. Athelstane will do the same, moving to engage one of the orcs and attacking it in melee. Gandrell declares that he’s going to Shoot Missile against the other orc.
Move & Maneuver Phase: the orcs and Athelstane take their Move to Engage Action, moving half their movement as a Half Action.
Ranged Phase A: Gandrell’s bow is already loaded, so the elven warrior is free to release his arrow in this phase. He takes his Shoot Missile action (which counts as a Full Action) and makes an Attack Roll against the orc. Gandrell’s Longbow is a Ranged weapon, so he’ll be adding his Ranged Skill bonus to the roll, subtracting the orc DEF score from the total. Since the orc hasn’t spotted him yet, it won’t be able to use the shield it carries against his attack, which means its DEF is a meagre 5. The orc is within the Base Range of the Longbow (35 meters), so there aren’t other modifiers to the Attack Roll.
Gandrell rolls a 66, adding his Ranged Skill bonus of 80 and subtracting the orc’s DEF score of 5 gives us a total of 141. The orc is wearing a Chainmail armor, so the player checks the 141 one result on the Missile Weapons Attack Table, under the CH (Chain) column: 23 points of damage (bringing the orc’s HPs from 60 to 37), and a Lethal Critical Strike.
The player rolls again on the Pierce Critical Strike Table, with a +50 modifier, because Gandrell scored a Lethal: 83, plus 50 gives us a result of 133: “Strike to the rear of the knee tears ligaments and damages muscle. Target’s prone and at -60 activity, takes +8 Hits and 3 Bleed and is Stunned”. This takes the orc to 29 HPs, which is below its Bruised score, meaning it’ll take another -20 penalty to all actions until healed.
Melee Phase: it’s time to resolve the melee attacks. The orc that Gandrell hit is Stunned and cannot take Full Actions, so won’t be able to attack this round. To determine who’ll strike first between the other orc and Athelstane, we first confront their weapons. They both wield Long weapons (a Short Spear and a Battle Axe), so the initiative goes to the character with the highest CMB, which would be Athelstane (85 vs the 60 of the orc). However, the orc decides to go for a Dashing Attack, taking a -30 to its Attack Roll, but treating its short spear as Longest weapon and thus gaining the right to strike first. Athelstane decides to set 10 points of his CMB to Parry the orc’s attack.
The GM rolls a 46 on the d100 for the orc, and add its CMB of 60, subtracting 30 for the Dashing Attack, 25 for Athelstane total DEF (15, plus 10 coming from his Parry) and 20 because the orc took a Half  Action (Move to Engage) this round: a total of 31.
Looking up on the Edged Weapon Attack Table, under the PL column (because Athelstane is wearing a Plate armor), we see that the attack misses.
It’s Athelstane turn: his player rolls a 76 and adds the character’s CMB of 85, minus 20 because he took a Half Action this round, minus the 10 points he shifted to his parry, and minus the orc DEF of 30, for a total of 101. The Edged Weapon Attack Table gives a result of 10 damage and a Superficial Critical Strike under the CH column for this result.
Athelstane rolls on the Cut Critical Strikes Table, with a +0 modifier because he scored a Superficial Critical Strike. The result is 53: “Minor forearm cut. +4 Hits, 1 Bleed and target’s Stunned”. The orc is reduced to 46 HPs.

No other action will take place for this round, so we can go directly to the next one. As you can see, we “skipped” several phases (like the Spell Phase or the Other Actions Phase), simply because nobody declared an Action for those phases.

The fallen orc crawled away, hiding behind a fallen menhir. I hit my enemy with all my strength, making it fall face down on the mud. Gandrell rushed a second arrow, but only managed to hit the stone behind which his enemy was hiding.

Round 2
Assessment Phase: the orcs are Bleeding and Stunned, the GM take note of their condition and reduces their HPs by their Bleeding amount. The first orc goes to 26 HPs, the one engaged in melee with Athelstane goes to 45.
Action Declaration Phase: the GM announces that the prone orc is going to take cover, crawling behind a menhir. The other is going to stay where it is, parrying with half its CMB (being Stunned it cannot shift more than half of its CMB to Parry). Athelstane attacks the again, while Gandrell decides to Quick Load and then Shoot the other orc.
Move & Maneuver Phase: one orc crawls away, moving half its movement and hiding behind the menhir.
Melee Phase: The orc is Stunned and cannot attack. Athelstane rolls to strike: he gets a 91, plus 85 of his Polearms Skill and plus 20 (because his opponent is Stunned), minus 60 for the total DEF of the orc (30, plus 30 points of CMB shifted to Parry). A total of 136, meaning 16 damage and a Grievous Critical Strike. The orc goes to 29 HPs and is Bruised.
Athelstane rolls for the Critical Strike: 82 on the d100 plus 30 (because it’s a Grievous Critical Strike) gives a result of 112: “Powerful strike to the chest. Target is Prone and Stunned and takes +12 hits and -30 activity. If the target’s not wearing metal armor: 10 Bleed.”
The orc is wearing metal armor, so it “only” goes Prone and takes 12 hits plus the Injury. It goes to 17 HPs.
Ranged Phase B: Gandrell shoots in this phase because he decided to Quick Load. The elf rolls a 35, adding his CMB of 80. The +20 bonus he gets for attacking a Stunned opponent is basically cancelled by the -20 he has for the Half Action he has taken this round (Quick Load), so we need to subtract just the orc’s DEF. The GM rules that the menhir offers the same protection of a wall shield to the orc bumping its DEF to 70. The total is 45 (35+80-70), which is a miss.
Other Action Phase: the orc behind the menhir stops being Stunned, while the other keeps being Stunned since it received another Stun result this round.

That was my opportunity of ending this fight swiftly. I let my ax slide in my two hands when suddenly, out of the corner of my eye, I saw a huge shadow leaving the woods. The surprise made me miss an easy blow, and my axe slipped out my hand. I barely noticed the orc getting up and seeking shelter far away from me. A gnarled, enormous creature was charging toward me, swinging a huge spiked mace. It was time to think quickly.

Round 3
Assessment Phase: both orcs are still Bleeding: one goes to 23 HPs, the other to 16 HPs and is Stunned.
Action Declaration Phase: the orc behind the menhir decides to get up, while its companion can only parry with half of what remains of its CMB and hope for the best. Athelstane attacks again, while Gandrell uses a Full Action to reload his bow.
Move & Maneuver Phase: the orc gets up from the Prone position.
Melee Phase: Athelstane rolls to attack, but gets a result of 5, which is within the Clumsy Range of his weapon, meaning he Fumbles his attack. Rolling on the Weapon Fumbles Table (with a +50 modifiers because he’s wielding a Polearm) the gets a total result of 87: The character must Assess or be Stunned next round, and gets to choose one: drop the weapon; or take a Superficial Critical Strike of the
appropriate type. He decides to drop his weapon.
Other Action Phase: the orc engaged in melee with Athelstane stops being Stunned. 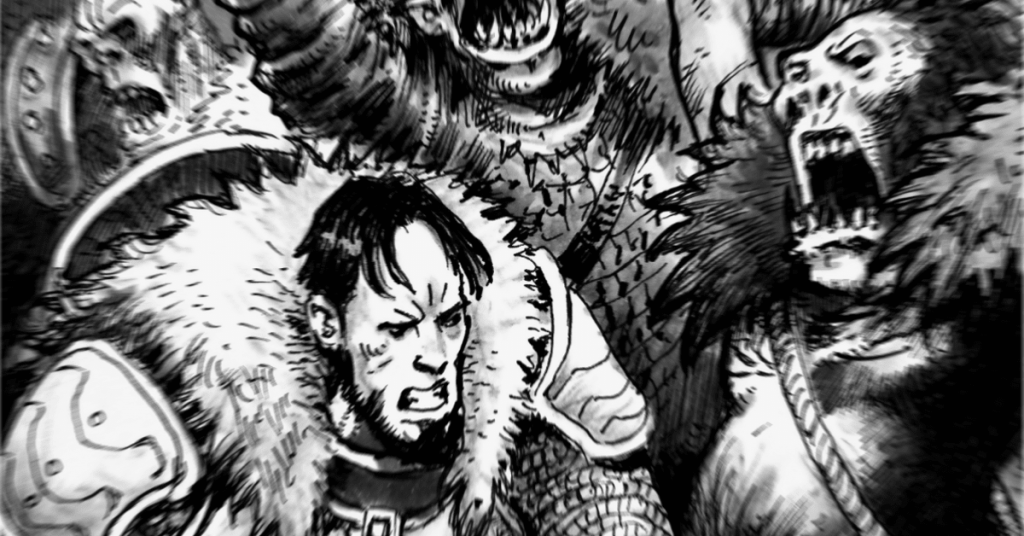 At this point, the third Round ends, but a new, terrible foe joins the battle. How will Gandrell and Athelstane fare against this unforeseen menace? Find out in the next part of our “The Darkmaster Arena” post series!