In our last article, we talked about Passions and the ways they can be used to give more depth to your heroes.

As we’ve seen, Passions can be used both by the GM to create situations the players at the table will find more engaging, and by the players themselves to tie their characters to the events of the adventure they’re playing.
Players can write their character’s Passions on their own, simply highlighting the aspects they find most intriguing about their backgrounds and personality, but Passions really shine when the whole group is involved in writing them.

Let’s see how to do that by using our Ready to Play Characters and our introductory scenario “The Beast of Willow Lake” (you can find it in the Download section) as an example.

Every adventure starts with a simple idea, something that captures the interest and sparks the imagination of the players.
This idea doesn’t have to be particularly complex at first but should include a couple of major threats or issues, as well as a primary location and a few major NPCs or factions.
It’s best to avoid developing these details too much just yet. You should end up with just a bunch of names and notes, or possibly something resembling the blurb on the back cover of a book, pitching the starting situation without giving away too much.

For The Beast of Willow Lake, we decided to take some very traditional fantasy elements – the typical pastoral village, monsters roaming about, a mysterious past- and give them a small twist by using them for a sort of murder mystery. So, our pitch would be something like: “People are disappearing in the sleepy town of Willow Lake. The terrified villagers speak of a terrible beast stalking the woods at night. But is the small town really as peaceful as it seems? Do you have what it takes to solve the mystery of The Beast of Willow Lake?”

At this point the group should get together and create the PCs, using the notes prepared so far as inspiration. Start by giving each character a reason to be there, something that makes him or her really part of the story.

In our case, the main issue of the adventure are the disappeared villagers, and both Maedoc and Tobold’s Allegiances (“I’ll help Eamon to solve Willow Lake’s troubles” and “I’ll do my best to help my cousin Mirabella and the people of Willow Lake”) are very straightforward Passions, tied directly to it.
Mornien Allegiance (“I’ll show Nevynn what I’ve learned during these years”) is similar but also introduces a new character to the cast. In fact, we didn’t think of including the old wizard in the adventure until we introduced Mornien, but as soon as we did he became an integral part of the setting. This is a great example of how, by writing their Passions together, players can give ideas to the GM for introducing new elements and expanding the adventure.
Passions like Deirdre’s and Gandrell’s Motivations (“I must discover what hidden evil plagues this lands” and “I’ll find out the truth about Willow Lake”) are perfect for players who prefer longer-term goals.
Athelstane is the only character who isn’t directly involved in the events of Willow Lake, but his Nature (“I can’t stand to see injustice to pass”) makes sure his player will find plenty of reasons to stay.

Use the second Passion to bring the characters together. Create friendships, rivalries, alliances; give them similar or complementary goals and ideals. The heroes don’t have to know each other when the adventure starts but should be pulled together by their actions and their Passions.

Athelstane and Gandrell are perhaps the clearest examples of how Passions can be used to inspire interesting intra-party dynamics. Their Allegiances (“I’ll prove Mornien my valor” and “Mornien is my friend’s pupil, I must see that no harm comes to her”) are both focused on another party member. They could lead to a small rivalry between the elf and the high man, but could also spark a sense of camaraderie, depending on how they’re played out.
Mornien’s Nature (“I need no help, I can manage myself”) gives us a very clear idea of her personality and adds another layer to her relationship with Gandrell and Athelstane. You can immediately tell that simply putting these three characters together will generate a lot of interesting moments at the table.
The other three characters are basically strangers at the beginning of the adventure, but Deirdre’s and Maedoc’s Natures (“All children of Nature are my children” and “My word is my bond”) both make it easy for them to become part of the team and spotlight some part of their personality that could put them into trouble. Similarly, Tobold’s Motivation (“I’ll become the greatest Sheriff the Bailiwick ever had”) makes him a likable character and gives him something in common with Athelstane who, much like the halfling, is on a quest for redemption.

The third and final Passion can be about anything you want. Use it to spotlight the parts of your character’s personality, Culture, or background you prefer, or as a mean to tell the others which parts of the setting or game you, as a player, like the most. 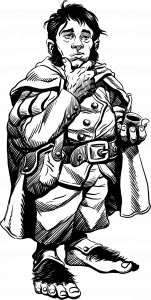 We used Maedoc’s Motivation and Deirdre’s Allegiance (“I wander the land to protect my clan and Kin” and “I will protect these forests at any cost”) to stress their serious and dependable personality, but also as possible mean for the GM to bring other woad or dwarven characters into play. His Fey Culture makes Gandrell an outsider in the world of men, and his Nature (“The laws of men do not apply to me, only the rules of Nature bind me”) is all about that. Tobold’s Nature (“I think better on a full stomach”), on the other hand, can easily provide some comedic relief (and can be used to bring into play the halfling’s Second Breakfast Special Trait!). Finally, Mornien’s and Athelstane’s Motivations (“I will conquer the secrets of the Ancients” and “I’ll clear my name and make my father proud of me once again”) are recurrent or long-term goals that can always be used as hooks or to insert new elements in the adventure.

And, with that, you’re ready to go. The characters’ Passion, combined with your initial notes should be enough to get an epic start for your campaign, and enough fuel to get it running for several sessions. As the game progress Passions will change, characters will evolve, and their decisions will spark new situations.
The adventure may have come to an end, but the epic saga of your heroes has just begun…

We hope you found this article helpful, don’t hesitate to leave a comment on our forums, if you have other questions about the game! Or reach us on our social media accounts or on the Against the Darkmaster Discord Channel!