Welcome back traveller, and Happy New Year!
As you may already know, we recently took a very important (and quite drastic) decision regarding the Strider Vocation. If you missed it, you can read all about it here.

Turning the Strider from a Vocation to a Background Option obviously meant that we also had to revise our own “iconic” Strider: Maedoc the Cunning, from the pregenerated characters for “The Beast of Willow Lake” introductory scenario. 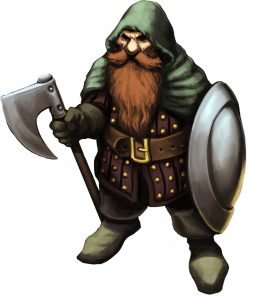 Initially, we decided to turn him into a Rogue, giving him the first Tier of the new Strider Background Option. We also changed his Culture from Deep to Weald, which seemed more fit to his background, since ”

Weald characters are raised to and live a harsh life on the borderlands and into the wilderlands, preferring to earn their lives on the outskirts of civilization“.

This made Maedoc a good outdoorsman; a decent fighter with an axe (even if not as good as his previous incarnation); and also quite good in the Roguery area.
All in all we were satisifed, as Maedoc seemed a pretty well-rounded character, who could develop in many different directions, depending on what the player wanted.

But then we thought that Maedoc could also be a Warrior. After all, he’s one the Rovers, defending the Dwarven Kingdom from all kind of threats, from bandits to would-be invaders.
So we started again, this time re-creating him as a Warrior and keeping the Deep Culture for those sweet 4 ranks in the Blunt weapons Skill. In this version Maedoc is slightly more focused. He’s still a good outdoorsman, thanks to the Strider option, but it’s clearly much better at fighting than his Rogue version (or than the original version). However, he’s also definitely less subtle, lacking training in certain skills that some players would like to develop.

In the end we liked both versions. Both seemed plausible and fun to play. What a conundrum… Luckily we can ask your help!
Which Maedoc version do you prefer? Which would you rather play?

Tell us in the comments below, or come and discuss your idea on our forum!