You have returned! Great timing, Athelstane is just about to continue his tale, picking up where we left off last time.

I broke out in a cold sweat when I recognized the hulking creature that ran bellowing toward me. It was a Dark Troll, one of the most formidable servants of the Darkmaster.
The orc before me tried to stab me with its spear, but one of Gandrell’s arrows buried itself in its neck before it could act. I jumped into the mud to grab my axe, and I felt the ground shaking as the Troll hit the spot where I was standing one second before.

Assessment Phase: Athelstane makes a Songs & Tales roll to identify his enemy. With a Partial Success, the GM tells the players that it’s a Dark Troll, but doesn’t give any other insight on the creature.
Action Declaration Phase: one of the orcs decides to flee, while the other attacks Athelstane. The Troll move to engage and attacks Athelstane. Athelstane grabs his axe and face the enemy, while Gandrell attacks the orc that didn’t flee.
Move & Maneuver Phase: one orc leaves the fight. The Dark Troll reaches Athelstane, who uses a Half Action to reach for his axe.
Ranged Phase A: Gandrell shoots, and gets a result of 22 Damage and a Griveous Critical Strike. The orc has only 16 HPs left, so the damage alone would be enought to put it out of the fight, but Gandrell’s player rolls on the Pierce Critical Strike Table anyway, getting a 90, which become a 120 with the +30 modifier from the Critical Strike’s Severity: “Strike to the neck. Artery punctured: +10 Hits, 15 Bleed, target Stunned”. The orc is Bleeding for a total of 16 HPs/round, which means it’s suffering from Exsanguination, and will die in 4 rounds.
Melee Phase: The Dark Troll has the longest weapon, so it will attack first.  Athelstane wisely decides to Parry with half of his CMB (the maximum amount he can shift to parry, since he’s wielding a 2 handed weapon), bringing his DEF to 50 against this attack, and the troll misses. Athelstane attacks next, but with a remaining CMB of +40 and the Dark Troll’s DEF of 40 he scores a total result of only 31 and misses.

The creature was much faster than I imagined. I had just enough time to raise my axe that that evil spawn was already swinging another blow. And this one landed, hitting hard on my shoulder. The shock made my vision blurry and everything turned red, but my armor absorbed most of the damage.

Round 5
Action Declaration Phase: The troll and Athelstane keep attacking each other. Gandrell reload his bow.
Melee Phase: The Dark Troll rolls to Attack and this time Athelstane shifts only 25 points of his CMB to Parry, bringing his DEF to 40 and hoping to survive the troll’s blow and strike back. The troll rolls a 22, adding its CMB of 130 and subtracting Athelstane’s DEF gives us a total of 112. The Blunt Weapons Attack Table entry for that result under the Plate column reads 11 damage and a Superficial Critical Strike. Rolling on the Impact Critical Strikes Table (with no modifier), the troll scores a 67: “Side strike. Target is Stunned and +6 Hits. If no rigid armor: 1d5 broken ribs, -5 penalty for each broken rib”. Luckily Athelstane’s wearing a rigid armor, so he “only”suffers the first part of the result.

I remember diving behind one of the menhirs, trying to put it between me and my enemy. “Well,” I said to myself, as I heard the troll’s heavy steps getting closer and closer “at least I will die where the Ancients were anointed.” The creature lifted its mace to strike me down, but Gandrell hit it with an arrow on its leg, making it lose its balance and weakening its blow. With an angry roar, the troll slowly turned towards the elf.

Round 6
Assessment Phase: Athelstane is Stunned for this round, so won’t be able to attack.
Action Declaration Phase: Athelstane moves with half his movement behind the menhir for cover. The troll chases and attacks him. Gandrell shoots the troll.
Move & Maneuver Phase: Athelstane and the troll move.
Ranged Phase A: Gandrell attacks, getting a +30 bonus to his roll because he’s attacking from the rear. He gets a total result of 127 (80 from his Ranged Skill Bonus, plus 30, minus the troll’s DEF of 40, plus a roll of 57), which against Chain armor means 19 damage and a Moderate Critical Strike. However, trolls are Heroic foes, meaning that they reduce the severity of each Critical Strike they receive by one step, so Gandrell must roll a Light Critical Strike instead of the Moderate. He gets a total of 87: “Strike to lower leg under the knee. Tendons and muscle torn. +3 Hits, Stunned and -25 activities”. Unfortunately for our heroes, the Dark Troll is also immune to Stun, so it will only suffer the additional damage and the action penalties.
Melee Phase: Athelstane used his action to move, so he cannot parry, but the menhir behind which he has taken cover gives him the same protection of a Full Shield (+25 to his DEF). The troll rolls to attack, with a modified CMB of 105 (a base of 130, +20 because Athelstane is Stunned, -20 because it moved, and -25 from its Injury), minus Athelstane’s total DEF of 40. The GM gets a total of 96, inflicting 9 points of damage to Athelstane, but no Critical Strike.
Other Action Phase: Athelstane stops being Stunned.


The monster let out a terrifying roar and charged Gandrell, who dropped his bow and draw his elven blade, shifting into a defensive stance and putting his back against one of the others standing stones. Mustering what strenght was left in me I grabbed my axe with both hands and chased the beast.

Round 7
Action Declaration Phase: The Dark Troll moves towards Gandrell, chased by Athelstane. Gandrell moves and switches weapon.
Move & Maneuver Phase: The troll reaches Gandrell, who moved near one of the standing stones. Athelstane is right behind the troll.

The monster swung its huge weapon at Gandrell, but my friend stepped aside at the last moment, evading a blow that would have surely crushed his skull. The troll’s mace instead hit with a crashing sound the great stone behind him, splintering it and sending large chunks of rock flying into the mud. “For Karthmere!” I cried, lifting my axe “For the Nine Kingdoms!” And hacked at the beast with all my might. 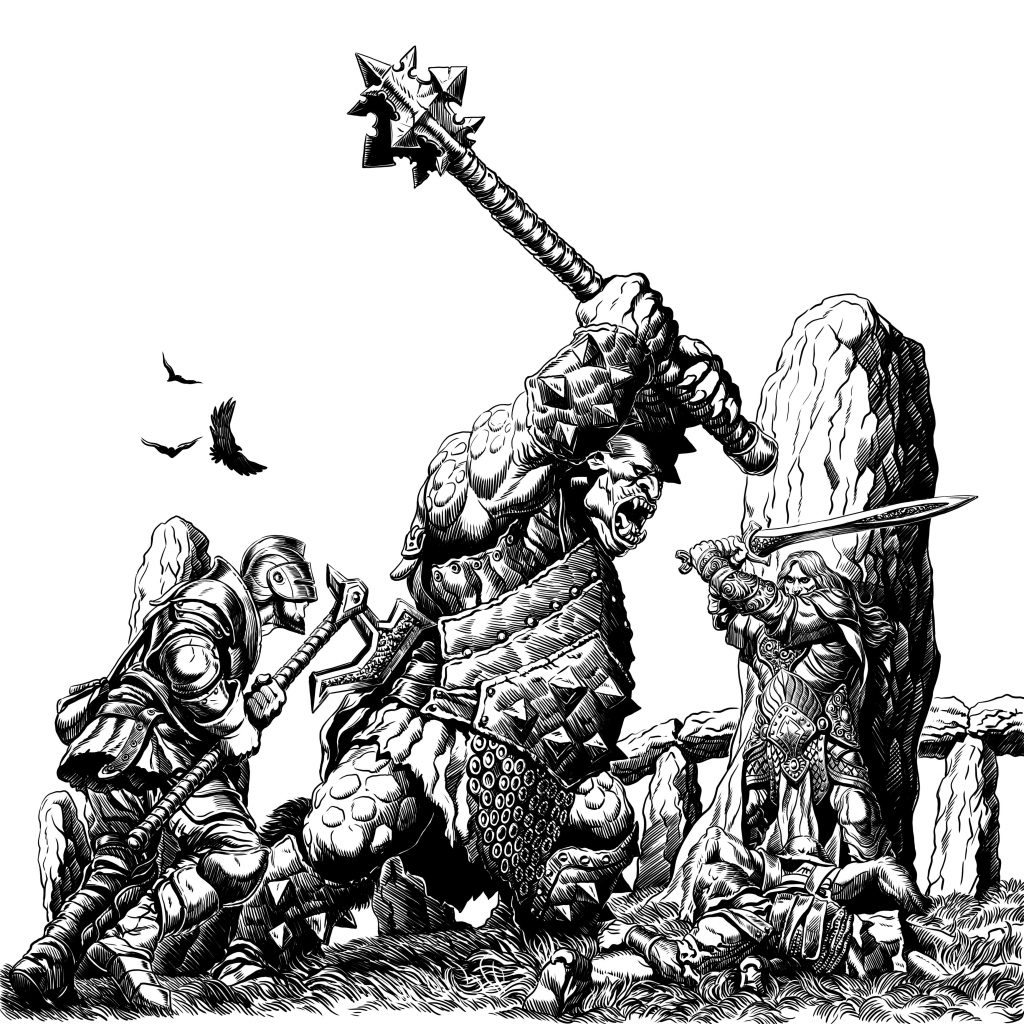 Round 8
Action Declaration Phase: The troll attacks Gandrell and our two heroes attack the troll.
Melee Phase: As the troll attacks him, Gandrell parries with half his CMB (again, he’s wielding a 2 handed weapon), bringing his DEF to a total of 65. The troll scores a total of 74, inflicting only 7 points of damage to Gandrell. Athelstane declares that he’s going to use two of his Drive Points to gain a +20 bonus to his Rolls for the rest of the combat, then rolls to attack. He has a CMB of 85, plus 30 from the Rear bonus, plus another 20 from the Drive. Rolling a 71 and subtracting the troll’s DEF he gets a total result of 166: 30 points of damage and a Lethal Critical Strike, which is turned into a Grievous Critical because of the troll’s Heroic ability. Athelstane rolls on the Cut Critical Strikes table and gets a 97! Plus 30 from the Severity this gives us a 127: “Strike severs target’s foot. Target is downed Prone and Stunned and Bleeds for 8. -50 activity”.

Even with its immunity to Stun, the troll is still knocked Prone and has accrued a total penalty of -75 to all its actions. There’s no much else it could do to threaten the characters, who are the clear winners of this fight.
As you can see, in Against the Darkmaster fights are often won without having to actually kill your enemy. In the next episode of this series we will see how this impacts gameplay and how the GM can use Injuries and Critical Strikes to change the stakes of a fight  and decide the NPCs actions.